In a fascinating addition to the screen time debate (aka is social media hurting the kids) Przybylski & Orben have published a study in Nature Human Behavior,  the study is based on massive amounts of statistical data and has once again shown that we shouldn’t be freaking out about screens or social media. Since the market for fear mongering books about technology that tickle parent paranoia are profitable, I doubt that this will settle the discussion.

Highlights from their study:

With this in mind, the evidence simultaneously suggests that the effects of technology might be statistically significant but so minimal that they hold little practical value.

While we find that digital technology use has a small negative association with adolescent well-being, this finding is best understood in terms of other human behaviours captured in these large-scale social datasets. When viewed in the broader context of the data, it becomes clear that the outsized weight given to digital screen-time in scientific and public discourse might not be merited on the basis of the available evidence.

For example, in all three datasets the effects of both smoking marijuana and bullying have much larger negative associations with adolescent well-being… than does technology use.

Positive antecedents of well-being are equally illustrative; simple actions such as getting enough sleep and regularly eating breakfast have much more positive associations with well-being than the average impact of technology use…

Best line in the paper…

Social media gets blamed for a lot of ills, but sometimes the results are exaggerated. Here is an interesting quote from The truth about the suspected link between social media and self-harm

While some studies have found a link between social media and suicide, Przybylski’s colleague Amy Orben has noted that the correlation with mental health issues is tiny. In one study, social media use explained only 0.36 per cent of a girl’s depressive symptoms. That figure is so low, it could just be statistical noise.

Anyone who is trying to think about platforms and their impact should be following Mark Carrigan. His Platform Capitalism Reading Group includes key readings and is a discussion I wish I could have attended. And then their is this simple text What is platform literacy? in connection with a call for reading materials. This is why this is a fascinating question:

“In the last couple of years, I’ve found myself returning repeatedly to the idea of platform literacy. By this I mean a capacity to understand how platforms shape the action which takes place through them, sometimes in observable and explicit ways but usually in unobservable and implicit ones. It concerns our own (inter)actions and how this context facilitates or frustrates them, as well as the unseen ways in which it subtly moulds them and the responses of others to them.”

Nothing is more beautiful (and frustrating) to an academic to read a simple paragraph that nails the questions rattling around in your own mind. Thanks Mark!

The goal of platform literacy is to be able to identify the subtle ways in which actions are directed, controlled, regulated and censored in the online environment. To mangle the great “Whereof one cannot speak, thereof one must be silent.” (Wittgenstein) – We cannot protest that which prevents us from protesting.

I am reworking the media timeline that I use for teaching and this is what I have so far. What am I missing? Are there any glaring errors or omissions? The dates are notoriously hard to pin down on some things and I have used the earliest invention rather than the date they maybe became more popular. The social media timeline in the bottom needs to be extended to include more years and maybe be redesigned to better fit into the style of the others. 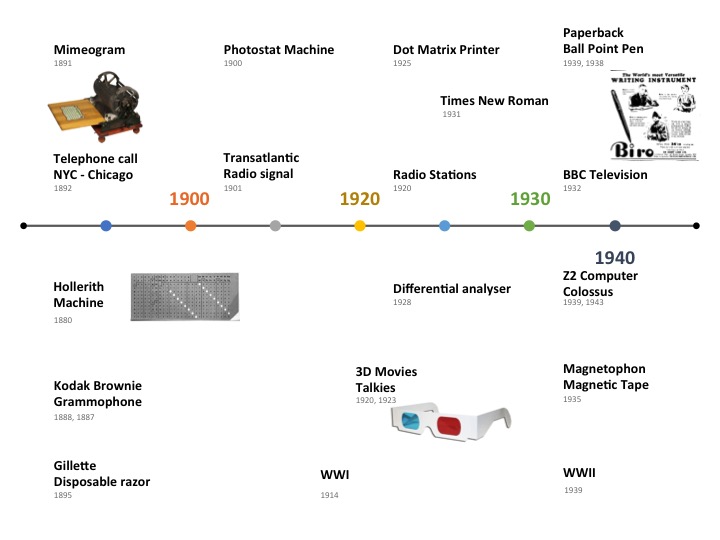 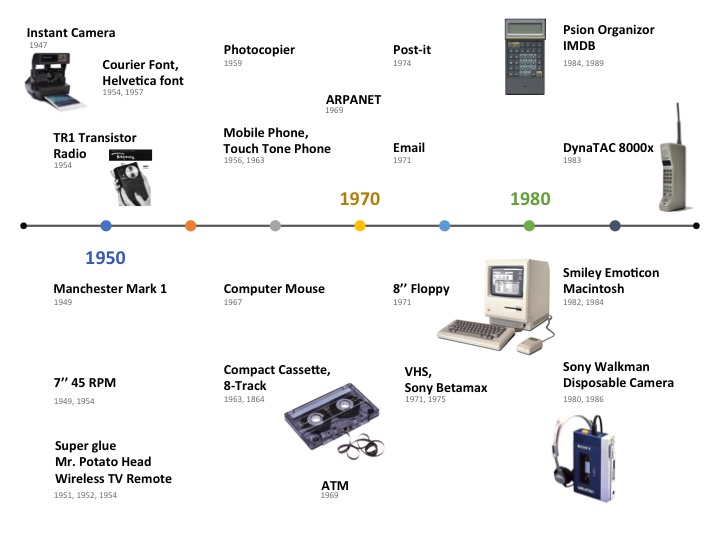 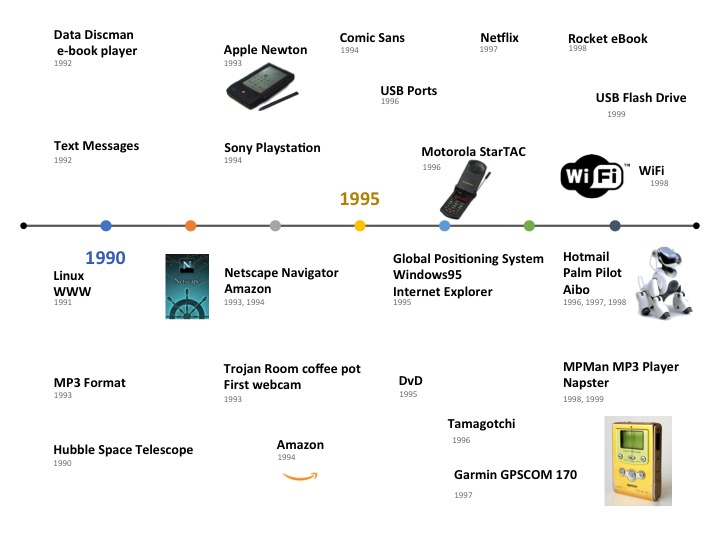 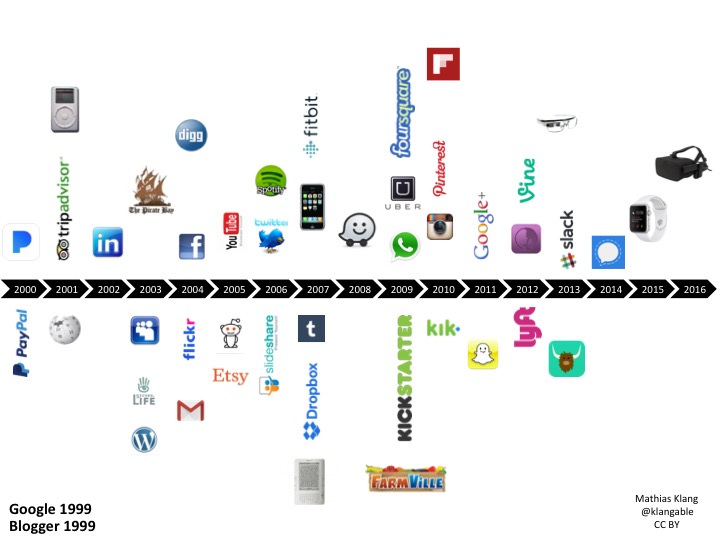 The original ppt slides are available here if you want to reuse them.

Posted on September 7, 2017 by Mathias Klang

I’m looking forward to participating in the Sixth Annual International Symposium on Digital Ethics which will be in Chicago on Friday, November 4.

The keynote speaker will be Lilie Chouliaraki, author of The Spectatorship of Suffering and Professor of Media and Communications at the London School of Economics.

Posted on September 5, 2016 by Mathias Klang

The difference between a community and a network is that you belong to a community, but a network belongs to you. You feel in control. You can add friends if you wish, you can delete them if you wish. You are in control of the important people to whom you relate. People feel a little better as a result, because loneliness, abandonment, is the great fear in our individualist age. But it’s so easy to add or remove friends on the internet that people fail to learn the real social skills, which you need when you go to the street, when you go to your workplace, where you find lots of people who you need to enter into sensible interaction with.

Professor Steven Salaita was due to begin working at the University of Illinois. Days before he was scheduled to teach, he had quit his old job and put his house on the market. All in good faith that he had a job. He was fired for ‘Uncivil’ Tweets. The university argued that his position was still conditional on final approval and therefore he wasn’t actually fired – he was just never hired.

Now a federal court has found in favor of Salaita and has allowed his lawsuit against the University of Illinois to proceed, and the chancellor who rescinded his appointment last year has resigned amid an ethics investigation.

This is good news. I make my position clear and I am happy that academic freedom and free speech are being valued highly.

My argument is not against those individuals who would disagree with me. I don’t mind or care that we are in disagreement. That is the whole point of free speech after all.

Now that the federal court has found support for Salaita and the concept of academic freedom and the need to protect speech – what are these organizations going to do? Isn’t it time that they apologized? No, they don’t need to apologize to Salaita (even though I think that would be a generous move that demonstrates growth) but I do feel that they should apologize to their members.

Take for example the letter from the American Sociological Association

We write as elected leaders of the American Sociological Association to express our support for your decision not to hire Dr. Steven G. Salaita as a faculty member at the University of Illinois. Although some sociologists disagree with your decision, as a previous letter indicated, we wanted you to know that some sociologists, including leaders of the American Sociological Association, support your decision. We personally feel if a job candidate openly disparages an entire minority group it is a good reason not to hire him or her as a new faculty member. Dr. Salaita’s public expressions of hatred and his public endorsement of violence have no place in the University of Illinois.

The problem is that the university HAD hired him. They were dismissing him. The rhetorical and legal loophole is fake. Most hires are subject to approval and if we were to wait for such approval then the hiring system would grind to a halt. The “elected leaders of the American Sociological Association” spoke for their organization and their members. Now the court has shown them the error of their ways: will they now finally apologizing to their members?

Academic organizations are there to raise awareness about the subject they represent and also to ensure that the academics who make up their organization can carry out their research and teaching without being harassed. They failed. They came down on the side of censorship and they should, at the very least, apologize to the people they claim to represent.

How do you know when you’ve made a faux pas on a social network? If you let slip a politically incorrect comment in real life you should be able to tell that you have crossed a line by the pained expressions and the nervous squirms – but how do people squirm on social media?

This social squirming is important. It is a way in which we are schooled and taught the social boundaries of our world. Naturally some overly boorish person may actually say “we don’t accept that behavior here” but this is really unnecessary. We are usually good at picking up cues, the squirms are enough.

So how do people squirm on Facebook? Well they do so in the most passive aggressive way. Rarely do you find the boorish reproachful comment. Most often what we are met with is silence. Sure, offscreen it silence is a passive aggressive strategy but online it is the most commonly used.

Try it! Say something incorrect on FB and you will be frozen out of the social circle. Keep it up and people may begin to block you. Of course this means that the time nobody liked your post… it could have been that you crossed a social line.

It may be sad when a long time blogger decides to stop, but this is a well written reason for doing so:

…I am saturated in digital life and I want to return to the actual world again. I’m a human being before I am a writer; and a writer before I am a blogger, and although it’s been a joy and a privilege to have helped pioneer a genuinely new form of writing, I yearn for other, older forms. I want to read again, slowly, carefully. I want to absorb a difficult book and walk around in my own thoughts with it for a while. I want to have an idea and let it slowly take shape, rather than be instantly blogged. I want to write long essays that can answer more deeply and subtly the many questions that the Dish years have presented to me… Andrew Sullivan of The Dish stops blogging

Sullivan is a writer, whether he chooses to record it on paper or a blog is a choice. But this is yet another example of the technology seen as a problem. I want to read again, slowly, carefully. It reminds me of the slow reading movement (Examples here, here and here).