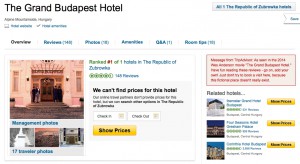 The hotel is the only hotel (on TripAdvisor) in the Republic of Zubrowka and has to date received 148 reviews. The reviews are the usual bizarre mix of what we have come to expect on social media sites.

User yumiyoshi complains that there was no free wifi, Max G echoes the sentiments of many others when he writes that the hotel is: “Past its prime.” And John P from New York warns us not to expect the Hilton.  Radit M from Surabaya, Indonesia even experienced gunfire in the lobby while staying there.

However, most of the guests seem prepared to ignore the minor flaws because the hotel is “charming”. This word seems to be the most prevalent among all the reviews. Tobir from Lausanne goes so far as to exclaim: “I must admit: The best hotel in the world!”

Absolutely gorgeous place! Beautiful architecture, furnished with a brilliant taste and style! Loved the view from my bedroom window! Enjoyed the local bakery and the location – very close to the ski slope! Fun and friendly staff! Helpful with some interesting tips for Zubrowka. I highly recommend this place for a short or long stay! Will definitely visit soon again!

Now for those of you who may not know by now… there is no Republic of Zubrowka and there is, unfortunately, no Grand Budapest Hotel with its quirky old time charm ageing gracefully in the mountains. It’s all made up.

But what does it all mean? Why have 148 people written (some interestingly detailed) reviews for a hotel that doesn’t exist? There have been other cases where people have created reviews for things that don’t exist. TripAdvisor was criticized for not noticing that Oscar’s in Brixham, Devon did not exist despite the good reviews it received.

However, this is different. There is no fraud, no gaming the social system; people just happen to have reacted to the movie and feel a need to connect with the hotel. Even if it doesn’t exist. The reason this is interesting is that the behavior speaks to our desire to inhabit the fictions that move us. The web has enormous communities devoted to the production of fan fiction, hobbyists spending their time developing fictional characters long after storylines have ended.

Fan fiction, whether it’s Star Trek erotica or reviews for a non-existent hotel, demonstrates that the consumers of culture feel a strong bond to stories that have moved them and want to prolong their experience by reliving the settings and characters. Copyright law tends to frown upon this behaviour, as it is a challenge to the legal fiction that the work, its popularity, and its longevity are the property of the author. Fans are purely incidental to this idea.

This is a narrow view of how culture moves in society and why we need copyright to ensure that more culture is created. The production of copyrighted material would be nothing without those who make it come to life in their imaginations. Whether they are reading, watching or listening – the work of art exists in its consumption.

TripAdvisor deserves some praise for their reactions to the nonsensical reviews of an imaginary hotel. They allow the texts to remain, they allow the dreamers to dream, they allow culture to live by allowing others to interact with their memories and the review site. They also include a warning:

Message from TripAdvisor: As seen in the 2014 Wes Anderson movie “The Grand Budapest Hotel.” Have fun reading these reviews – go on, add your own! Just don’t try to book a visit here, because this fictional place doesn’t really exist.