Certain technological artefacts should never have been designed, manufactured or used. Among these is the landmine. Its horrible impact is not only on the combatants but rather on the civil population which needs to live with the slowly decaying lethal devices for decades after the land was sown with them. Organisations such as the No More Landmines in the UK are working to ban them as legitimate weapons. These organisations need all the support that they can get.

The problem is that people are interested in a conflict while it is active and making headlines. When “peace” is achieved public interest declines considerably. This is unfortunate as the landmines remain. The cost of removing landmines is extremely high and almost impossible to meet for worn torn countries.

So how does one attempt to ensure that people’s interest remains focused on the landmine problem? Well artist & activist Will St. Leger came up with a novel and shocking approach. On Sunday 1st April he placed 100 fake ‘landmines’ made from stenciled metal plates in park around Dublin, Ireland.

Will explains: “The reason for doing this was to get people asking themselves “what if the world I walked in was littered with landmines?” They’re nearly all gone now, the Police took away most of them when a tourist called the emergency number to report ‘Landmines’. Afterwards, I wondered who the people of Laos, Cambodia and Iraq gonna call when they step on real landmine?” 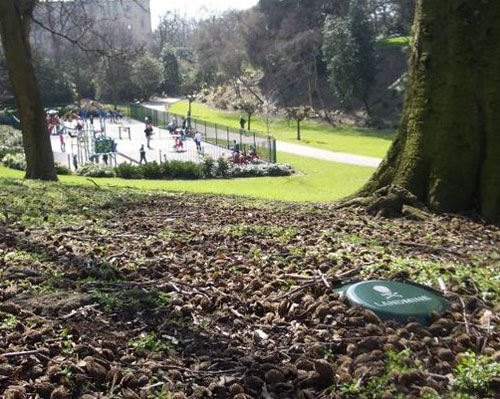