This lecture was about the ways in which the Simulacrum is a model for surveillance. The idea was to present the ways in which surveillance can be seen as beginning with juridical power of classical liberalism. This is best illustrated by the ways in which the power of the monarch was all about the right to use power over life and death to enforce commands. An illustration of this can be seen in Bentham’s model prison. This classic surveillance was built into the architecture and focused on reducing the cost of surveillance of the prisoners. In Bentham’s prison the efficiency was maximized when the few could easily and efficiently monitor the many. The norms we live by create the prison. Foucault writes in Volume One of History of Sexuality:

Power was exercised mainly as a means of deduction, a subtraction mechanism, a right to appropriate a portion of the wealth, a tax of products, goods and services, labor and blood, levied on subjects… a right of seizure… it culminated in the privilege to seize hold of life in order to suppress it.

This is, of course, Foucault’s starting point when he sees the prison as a metaphor of control and power. In the panopticon it was the prisoner’s role to internalize their own surveillance and become their own guards. In the wider society this can be seen by the ways in which we all become our own guards as we have internalized the social rules around us.

ith showing them Diego Velazquez’s Las Melinas from 1656. After describing what the image portrayed we spoke of the positioning of the artist, the royal couple, the courtiers, dwarves and dog. The meaning increased with the understanding of who everyone was. The next image was Thomas Gainsborough’s Mr and Mrs Andrews 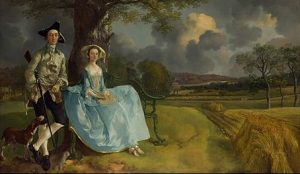 (1750) which portrayed the wealthy couple showing off their wealth. It reminds me of the boastful elements of social media. The next portrait was John Singleton Copley’s Portrait of Sam Adams (1772). This shows Adams slightly disheveled, holding a petition and demanding change. His head is oddly sized to his body and its hardly a flattering portrait. The image captures the high point of his activism rather than his physical prowess and wealth. 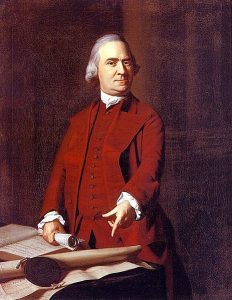 A major technological development is the camera. Now that mechanical reproduction was possible the question of what could be done in art was open for experimentation. From this point we see the development of different styles from the expressionism of Edvard Munch’s The Scream (1893), to the dadism of Marcel Duchamp’s Fountain, Jackson Pollock’s abstract expressionism, and the pop art of Andy Warhol.

These forms of art are often criticized for being simple and hardly worthy of the praise and attention they receive. The goal was to explain the ways in which we have moved from the dominant explanations of the world and begun to accept that multiple models of explanations that overlap and co-exist. The earlier forms of art are representations of a single idea and people. Later art has nothing so simple models of explanation but they are there to be interpreted and can offer different answers to different people. It was a fun exercise.

In particular asking the students whether something was art or not. Along with these famous images I also showed them an image of the joke that some people played when they put a pair of glasses on the floor in a gallery and people began taking photos of them. 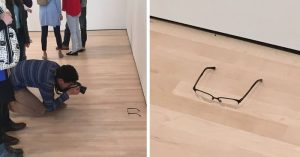 Asking the students if this was art led to an interesting discussion. Could Marcel Duchamp exhibit a urinal and everyone called it art then what was different with the eyeglasses?

The goal was to discuss the world of surveillance without a dominant narrative and how power is redefined. Instead of the (juridical) centralized power we are left to our norms and this comes into a form of control by desire. The desire to belong to, and follow a group of norms. I had the students post questions on the readings in advance. Some of the questions were:

So is Bogard saying that being able to predict the actions of a population is a more effective form of control than making the population think it is constantly being watched?

Do you believe that people want to be ‘private’ in certain aspects of their life because of over-surveillance or has there always been an innate feeling that we are being watched?

if simulations are truly a way of surveilling, or something else? Are simulations a violation of privacy if they are not technically real?

With this I moved on to explaining the simulacrum as envisioned by Baudrillard who asserted that,

as simulation ascends to a dominant position in postmodern societies, the sign’s traditional function of representation, i.e. its power to “mirror reality” and separate it from false appearances, comes to an end, along with its role in the organization of society.

The utopian goal of simulation…is not to reflect reality, but to reproduce it as artifice; to “liquidate all referentials” and replace them with signs of the real. The truth of the sign henceforth is self-referential and no longer needs the measure of an independent reality for its verification.

In explaining the simulacrum I turned to The Idea Chanel and Mike Rugnetta to help illustrate the concept. His video “How Is Orphan Black An Illustration of the Simulacrum?” is a great and popular way to introduce the concept.

So Baudrillard shares Foucault’s sense that the panoptic model of enclosure and its disciplinary logic are historically finished. They are not enough to explain the ways in which norms are used as control and surveillance.

The discipline enforced by panoptic surveillance evolves into a general “system of deterrence,” in which submission to a centralized gaze becomes a general codification of experience that allows no room for deviation from its model. In post-panoptic society, subjectivity is not produced by surveillance in the conventional sense of hierarchical observation, but by codes intended to reproduce the subject in advance.

Not to mention that…

…power does not vanish, but becomes simulated power, no longer instantiated and invested in the real, but rather reproduced in codes and models.

In a sense, all signification takes place within the orbit of the compulsion to repeat; ‘agency’, then, is to be located within the possibility of a variation on that repetition.

The next step was to introduce the concept of biopower. This is becoming more and more interesting with the increasing use of wearable devices and fitness apps. This mode of surveillance comes with the idea of measurement through ideas of normal. Once we introduce concepts such as IQ, standardized testing, and BMI we instantly measure ourselves against them. They are the basis for creating a “correct” way to be. After the readings, some of the questions asked by the students were:

Is invisibly guiding people towards information that reinforces their biases (presumably what they want) a form of corporate efficiency, informational slavery, or both?

Does this type of surveillance bother us? Why not?

How does personal technology increase the constant surveillance of our bodies?

But how can we really trust algorithms in surveillance?

Here are the powerpoint slides I used in the class.

Surveillance in the Simulacrum from Mathias Klang
share this