Next semester I shall be teaching a course that I find very fascinating and I hope will be very exciting. It’s going to be on Hate Speech & Propaganda (syllabus) and will cover a bunch of interesting areas.

The history of propaganda is fascinating and I would like to have expanded this area to include more but cuts had to be made somewhere. For this section I took inspiration from Jessica Nitschke‘s course “Power, Image, and Propaganda in the Ancient World“ and Philip Taylor’s book Munitions of the Mind. 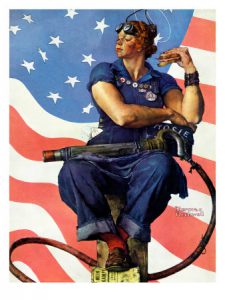 Additionally the course will address the rise of marketing and its connections to propaganda. I wanted to show the fantastic Bernay’s documentary The Century of the Self but at over 4 hours this may have been a stretch for the students. Following this I want to look more closely at the marketing of unhealthy products and lifestyles. In this cigarettes are a given but so is the (minimally) less well know issues of tobacco and sugar. For this section I will be relying heavily on the excellent The Cigarette Century by Allan Brandt.

This will be followed by a look at language and propaganda (naturally Orwell’s essay Politics and the English Language will be included) which should hopefully lead the course seamlessly into a discussion on free speech and then look into the areas of hate speech. There is a lot to chose from but the focus this time will be on the Danish Cartoons, Charlie Hebdo & Anti-Immigration. Followed by a look at holocaust denial, homophobia (and related topics) and the limits of hate speech.

The main book will be Jason Stanley‘s How Propaganda Works and I will be adding material to provide other perspectives and to cover hate speech. The syllabus is available and if you do have any comments feel free to contact me or comment.

Many companies want to be part of the “new” “trendy” world of social media but they are not prepared to accept the realities of the world in which they enter. Often the campaigns just get lost, they are a failure in silence but occasionally they turn into magnificent failures that make your job drop in amazement – what were they thinking?

In January 2012 it was McDonalds who attempted to create buzz by asking people to tweet their cosy moments under the hashtag #McDStories. They were obviously expecting plenty of nice little tales of happy customers enjoying advertising like moments but – of course – this was not the only thing that happened. Forbes published a story on the campaign #McDStories: When A Hashtag Becomes A Bashtag which included examples such as

One time I walked into McDonalds and I could smell Type 2 diabetes floating in the air and I threw up.

Hardly a brilliant piece of marketing.

In a more difficult situation the oil company shell has been the “victim” of an interesting Internet anti-campaign by Greenpeace. Greenpeace set up a copy of the Shell site and asked people to automatically generate advertising posters for their (Shell’s) arctic oil. Huffington post writes:

Since June, Visitors to the site arcticready.com were treated to a spoof mimicking Royal Dutch Shell Plc’s website, a collaborative effort by Greenpeace and The Yes Men, a pair of activists known to imitate companies they dislike.

The results were obvious

According to design consulting firm, PSFK, the public was ready to believe that Arctic Ready was a legitimate marketing campaign. “It is entirely plausible Shell might have been reckless enough to crowd-source adverts using its ‘Let’s Go’ line, and that the crowd-sourced efforts had included gems such as ‘This fox will murder you unless we kill it first. Let’s Go’”

Greenpeace soon released a statement claiming responsibility for the campaign…

When it comes to Social Media dialogues corporate budgets are inadequate when dealing with the sheer numbers of responses capable of being generated by individuals using social media. Any responses left for the corporations (such as suing for copyright violation or defamation) are more likely than not going to generate even bigger PR failures. What is a poor multi-billion dollar corporation to do?

Politiken.dk has an article revealing the truth about #Karen26 the YouTube film where a young Danish mother with a baby in her arms is trying to find the father of her child. She has forgotten his name. The youtube information includes:

Help me find the Father of Little August. If you can help please mail danishkaren26@gmail.com, see more about August here: http://karen26.mono.net/

This film was a huge success and it was only later (even if many saw it as a bluff straight off) that it came out that it was a paid advertisement from the Danish tourist board. Part of the visit Denmark campaign. Blogger adland nicely sums it up

Forget Tivoli, that teeny disappointment of a statue known as the little mermaid, the beautiful light of Skagen that inspired world renowned art, Legoland, the quaint walking street Strøget, Danish design, the ‘lawless’ Christiania with its art, music and funny cigarettes and open-minded living. These days Denmark is most known for cartoons that offend muslims, deporting muslims asylum seekers by forcing them out of churches in the middle of the night, and hippie-land Christiania is about to be torn down. Good thing they still have loose women and unprotected sex to sell the country by, right? Come to in Denmark.

Via TechnoLlama comes this wonderful image adding to the evidence that Vista is not popular. Going to the trouble of advertising a downgrade, you know your OS is in trouble. 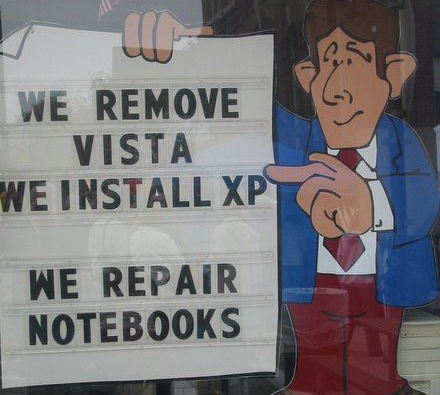