Yesterday we go the good news that the book proposal by Nora Madison and myself has been accepted by Rowman and Littlefield’s Resistance Studies series. The working title is “Everyday Activism: Technologies of Resistance” (but this will be changed later) and looks at the ways in which technology assists, mediates, and hampers acts of resistance. Tentatively the book will be published in the end of 2019. We are really excited about this project and happy to be able to focus on a long term project. 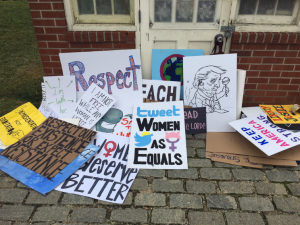 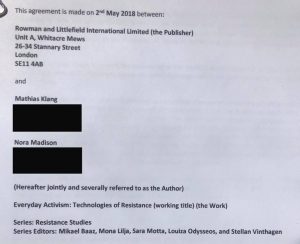 In conjunction with this I shall be using the blog to throw out ideas/updates about the project and generally return to using the blog as a more integral writing tool.

This lovely measurement comes from lovereading.co.uk

Where does the idea for an ebook come from? Some technology dreams are much older than we think. This cool late 16th century dos-à-dos book is really special as it contains six books. Erik Kwakkel writes:

These are very special objects consisting of usually two books, which were bound together at their, well, backs. When you were done with the one book, you would flip the object and read the other. The dos-à-dos book you see here is even more special. Not only is it a rather old one (it was bound in the late 16th century), but it contains not two but six books, all neatly hidden inside a single binding (see this motionless pic to admire it). They are all devotional texts printed in Germany during the 1550s and 1570s (including Martin Luther, Der kleine Catechismus) and each one is closed with its own tiny clasp. While it may have been difficult to keep track of a particular text’s location, a book you can open in six different ways is quite the display of craftsmanship.

This gif is from Io9

The book is in the Swedish Royal Library which has a very nice Flickr set demonstrating the book (and many others).

Six books in one. Not only six books one after another but six different books. Very cool. Sure, it’s still bigger and bulkier than my ebook reader but this is a bibliophile hipster’s dream.

Following the good example of Emily and the Lime presenting what we are writing for AcBoWriMo.

My project is to write a book about Online Identity (this is a very crappy working title). Since finishing my PhD (effects of technology on regulation of Democracy) I have had several ideas for longer works. All of these ideas have crashed and burned due to lack of time and other good excuses. So when I came across AcBoWriMo at the same time I had yet another idea for a book it was time to jump in with both feet.

The idea of the book is the way’s in which technological change are forcing changing attitudes to the concept of identity. In particular I will look at the ways in which regulation and protection of elements of identity are being affected by these changes. The fundamental idea is that we have previously agreed upon loosely defined and understood ideas of identity and their protection but these ideas and protections are being challenged (blown away almost) by the ways in which we use technology. The book will show the ways in which regulation fails and attempt to describe why this failure occurs. This is not really as clear as it should be but I am right now not focusing on defining the overarching idea of the whole book but building it from the bottom up with each chapter exploring different (though naturally related) changes.

For me the project began with a mindmap – (ugly version below) – and will in 18 working days reach 36 000 words in November and somewhere between 80 ooo – 100 000 words by mid January. For me AcBoWriMo is a welcome kick up the backside in forcing the launch of the writing project (no more excuses) and a pleasurable way in working alongside others – is this a form of misery loves company?

So what are you writing?

Another book has been added to my growing hoard of CC licensed works that are somehow relevant to my research area.

The Critical Point of View: A Wikipedia Reader is an interesting work featuring research from a large group of exciting and original thinkers. It is, as the blurb states:

About the book: For millions of internet users around the globe, the search for new knowledge begins with Wikipedia. The encyclopedia’s rapid rise, novel organization, and freely offered content have been marveled at and denounced by a host of commentators. Critical Point of View moves beyond unflagging praise, well-worn facts, and questions about its reliability and accuracy, to unveil the complex, messy, and controversial realities of a distributed knowledge platform.

Right now the chapters which have my interest are

The Argument Engine by Joseph Reagle, What is an Encyclopedia? From Pliny to Wikipedia by Dan O’Sullivan
A Brief History of the Internet from the 15th to the 18th Century by Lawrence Liang, Questioning Wikipedia by Nicholas Carr, The Missing Wikipedians by Heather Ford, and The Right to Fork: A Historical Survey of De/centralization in Wikipedia by Andrew Famiglietti. But this is only a small fraction of the topics covered in this work.

The Swedish cartoonist Mattias Adolfsson has now published “The First in Line: From the sketchbooks of Mattias Adolfsson” it can be ordered directly from the publisher: Sanatorium förlag. Order before the 1 of June and you will get it signed with a small doodle. I only wish that I had explained Creative Commons to him…

xkcd: volume 0 is the first xkcd book! It features selections from the first 600 comics, including various author and fan favorites. It was lovingly assembled from high-resolution original scans of the comics (the mouseover text is discreetly included), and features a lot of doodles, notes, and puzzles in the margins.

The book is published by BreadPig, a company founded by my friend Alexis, and their portion of the profits will go to build a school in Laos through the charity Room to Read.

Lawrence Lessigs book Remix: Making art and commerce thrive in the hybrid economy is now  is now Creative Commons licensed and ready for download from the Bloomsbury Academic page.

‘Lessig’s proposals for revising copyright are compelling, because they rethink intellectual property rights without abandoning them.’
Briefly Noted The New Yorker

‘… Lessig is surely right that digital culture requires governance that is more subtle and ecological, judging a balance of forces between commerce and community, than precise and draconian.’
Books of the Week, The Independent

‘Prof Lessig is formidably qualified…his latest book, REMIX will enhance his cult status on the web.’ The Guardian

Professor James Boyle describes how our culture, science and economic welfare all depend on the delicate balance between those ideas that are controlled and those that are free, between intellectual property and the public domain â€”the realm of material that everyone is free to use and share without permission or fee

Intellectual property laws have a significant impact on many important areas of human endeavour, including scientific innovation, digital creativity, cultural access and free speech. And so Boyle argues that, just as every informed citizen needs to know at least something about the environment or civil rights, every citizen in the information age should also have an understanding of intellectual property law.

The Public Domain: enclosing the commons of the mind