Teaching privacy and surveillance is a great reason to return to the theories that underpin everything, and I do enjoy introducing students to the history, function, and metaphor of the panopticon. While making myself rethink how it actually works.

The basic panopticon is nicely summarized by Jespersen et al in their 5-point list about the character of the panopticon in Surveillance, Persuasion, and Panopticon

So last week I focused on privacy and surveillance in situations of “invisible” panopticons. Invisible panopticons could still be covered by point 2 above. In the panopticon we internalize the rules for fear of being watched, and ultimately punished for transgression. But I was trying to explain why there are situations of of self-surveillance where we could easily “misbehave” and nobody would punish us. A misbehavior that nobody cares about aside from maybe myself. If I binge cookies for dinner, drink wine for breakfast, watch trash tv, ignore my work etc nobody cares (unless its extreme) but I may punish myself. Where is the panopticon/power that controls my behavior.

In this case the panopticon (if we can claim there is one) is… my self image? We really have to contort Foucault’s ideas to make this fit under the panopticon. As he says in Discipline and Punish:

the Panopticon must not be understood as a dream building: it is the diagram of a mechanism of power reduced to its ideal form; its functioning, abstracted from any obstacle, resistance or friction, must be represented as a pure architectural and optical system: it is in fact a figure of political technology that may and must be detached from any specific use.

The power over ourselves in settings where there may be no real social harm if we were found out, is more about the conditioning and identities with which we conform. And our ability to act beyond them, to break free of the constraints of power represents the scope of agency we have.

To behave outside the norms that reside within me requires that I am aware of those norms and that I am comfortable to break those norms. That I recognize that there may be other actions I could be taking, and that I am comfortable enough to take them. So the way in which Butler argues that we are not determined by norms. We are determined by the repeated performance of norms. This is as Butler agues in the conclusion of Gender Troubles “…‘agency’, then, is to be located within the possibility of a variation on that repetition.”

Therefore I am being surveilled by the idea of me. How that me would behave in any given situation is limited by my ability to see myself behave.

Teaching starts tomorrow. This is a timely reminder to ask the class participants how they identify instead of making assumption based on class rosters.
‘Ask Me’: What LGBTQ Students Want Their Professors to Know

Posted on September 8, 2015 by Mathias Klang

There I was calmly at home with the laptop, well prepared for the impending winter storm that is going to hit us soon when I got a message from a friend via Facebook telling me that there is a fake twitter account in my name. The message included a link to this account 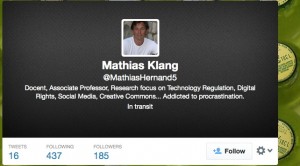 At first I didn’t spot it. All I saw was the number of tweets, following and followers were wrong. Then I saw that the text was wrong, before I finally saw the twitter handle was another. Here is my twitter account 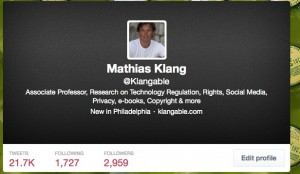 Not only had the cheeky bugger stolen my image and my (older) bio but even taken my background too. Damn! He/she has also violated the Creative Commons license for my image of the bottles in the background. No attribution!

He/she has been tweeting since August and only managed 16 tweets. But the last one was just hours ago. Why? Seriously It can’t be that difficult to create a profile – so is to somehow fool my friends? I doubt that would work.

To confirm your identity, fax a copy of your valid government-issued photo ID (e.g., driver’s license, passport) to Twitter

Really!! Not only do I have to prove that I am who I am, but now I have to find two pieces of archaic technology (photocopier and fax) in order to prove who I am.

What this proves is:

Yesterday Clarinette sent out a series of three tweets about the way in which we no longer are able to share culture as we used to. Mostly this is because much of our culture is locked into specific devices or user accounts.

Have you ever thought how much are devices have become ‘indivudualized’ ? Can’t share laptops, phones, iPads, eBooks or music anymore. (5:56 PM – 25 Jul 12).

Wondering what we will leave behind after death. I surely print much less picz, write very little on paper, most music is online…. (6:03 PM – 25 Jul 12).

Her comments are interesting as they illustrate the paradox that we probably have access to more cultural material than ever before but this culture is not shared between family, local community or even nationality. We do share culture – consuming is a form of sharing – but not in the same way as we did before. In many cases to share culture almost requires each sharer to have his or her own device (and of course that the cultural expression is not locked-in with DRM).

A friend of mine complained some time ago that it was not enough to buy one e-book reader for the family but each member needed to have their own device. When everyone had their own device the family’s reading habits changed – they no longer read the same book and talked about it. In one sense the sharing of culture within the family broke down.

In the long term this should also have an effect on the collected culture we leave behind (see for example Will Your Children Inherit Your E-Books? and Memory in the digital age). Not to mention the amount of stuff we “lose” somewhere on old hard disks.

Family photo’s a thing of the past? My Grandfather & I

Following the good example of Emily and the Lime presenting what we are writing for AcBoWriMo.

My project is to write a book about Online Identity (this is a very crappy working title). Since finishing my PhD (effects of technology on regulation of Democracy) I have had several ideas for longer works. All of these ideas have crashed and burned due to lack of time and other good excuses. So when I came across AcBoWriMo at the same time I had yet another idea for a book it was time to jump in with both feet.

The idea of the book is the way’s in which technological change are forcing changing attitudes to the concept of identity. In particular I will look at the ways in which regulation and protection of elements of identity are being affected by these changes. The fundamental idea is that we have previously agreed upon loosely defined and understood ideas of identity and their protection but these ideas and protections are being challenged (blown away almost) by the ways in which we use technology. The book will show the ways in which regulation fails and attempt to describe why this failure occurs. This is not really as clear as it should be but I am right now not focusing on defining the overarching idea of the whole book but building it from the bottom up with each chapter exploring different (though naturally related) changes.

For me the project began with a mindmap – (ugly version below) – and will in 18 working days reach 36 000 words in November and somewhere between 80 ooo – 100 000 words by mid January. For me AcBoWriMo is a welcome kick up the backside in forcing the launch of the writing project (no more excuses) and a pleasurable way in working alongside others – is this a form of misery loves company?

So what are you writing?