Joshua Rothman published an article in the New Yorker: Why is Academic Writing so Academic? as this article follows on the heels of the vaguely infamous piece in the Times by Nicholas Kristof “Professors, We Need You!” I was wondering if the whole thing should be seen as an exercise in trolling. In particular when I came across the interesting sentence:

Disinterested? Really? Most academics can be called many things but disinterested is not one. I agree with Peter Medawar‘s (Pluto’s Republic, p. 116). description of scientists:

It is not really possible to define scientists in any easy way. But all scientists are interested in their work, most are passionate, some are obsessive. There are famous arguments and grudge matches in academia to prove the level of intensity scientists feel toward each other. There are levels of passion for theories and objects studied that border on love.

Our published prose strives to be exact and specific but dry language should not be confused with lack of emotion – and definitely not be seen as disinterest. 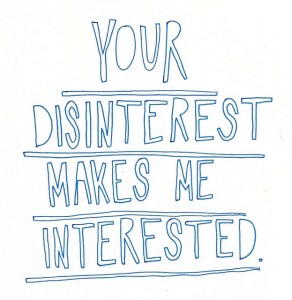 Exactement. Another one of Hilary Winston’s quotes by Rebecca CC BY NC ND.jpg