Ever since the first cell phones began appearing there has been a grumbling of annoyance. You would think it would subside but nope. In a BBC article yesterday Sherry Turkle is referenced:

People such as psychologist and professor Sherry Turkle warn that we’re in danger of losing the power of speech as we once understood it.

Apparently our smartphones have struck us dumb or mute or something. Turkle brings the classical cry of: Won’t someone think of the children! She argues that they are suffering from Psychological lockjaw.

Seriously this romanticizing of the past through the lenses of technophobia has to stop! Turkle who was once the leading proponent of: everything will be alright once we are online has now become a parent and thinks that her children don’t communicate enough. That their phones are all they stare at – therefore we must be witnessing the death of conversation.

The non-communicative teen is a staple of western culture and definitely predates any mobile technology. Looking around and seeing people happily communicating with devices scare people who are not communicating with devices. It’s not the teens that are losing conversation (they are hugely social and can both talk and text) it’s the lonely who would prefer that everyone was like them that wax lyrical about the past when everyone was joyful without technology.

The composer John Sousa was so annoyed by recorded music that in a submission to a congressional hearing in 1906, he argued:

These talking machines are going to ruin the artistic development of music in this country. When I was a boy…in front of every house in the summer evenings, you would find young people together singing the songs of the day or old songs. Today you hear these infernal machines going night and day. We will not have a vocal cord left. The vocal cord will be eliminated by a process of evolution, as was the tail of man when he came from the ape.

Our technology has changed the way in which we do things but it does not create change in the way that the technophobes argue. Teens (who are actually normal people, not some weird subclass) have long and heated conversations without devices – but only when it suits them. Just like adults.

Don’t romanticize the past… 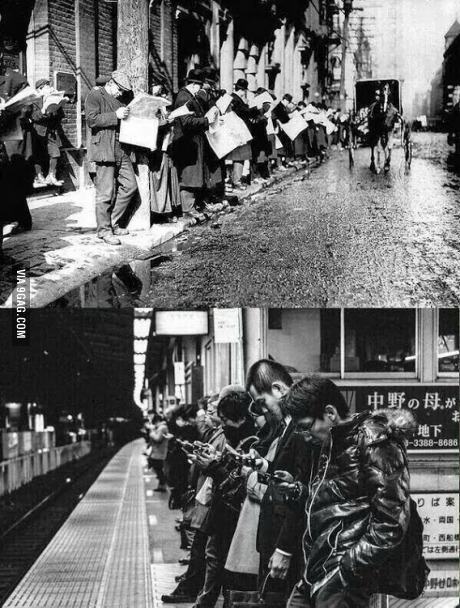