The Swedish Radio went digging for information about Tomas Norström the judge in The Pirate Bay case and found a few unpleasant facts about the judge:

He is a member of the Swedish Association for Copyright a society for spreading knowledge about, and developing the legal field of, copyright. He has worked for Stiftelsen .SE the organisation responsible for Swedens top-level domain name. Monique Wadstedt, the film companies representative during the Pirate Bay trial also worked there. Finally he is on the board of the Swedish Organisation for Industrial Design Protection.

So I would prefer to praise a judge for taking an interest in copyright law so that takes care of his membership in the association for copyright. That he worked for the same organisation as one of the lawyers involved in the case may need some explaining – what did he do there? when did he work there? what was his relationship to Monique Wadstedt?

The final one is more damning he is on the board for an organisation working to strengthen the protection of industrial design and also copyright – this is not good.

How impartial can a judge be? Should his interest in specific legal topics be seen as a negative or a positive if he is chosen to preside over a case. Naturally he should have taken up this with his supervisor prior to the case. Nomatter what, the focus is moving away from law to poltics. – the trial just got dirty.

XKCD is brillian! Here is his comment on the Pirate Bay trial 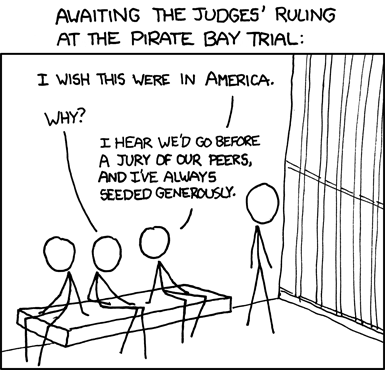 How much information is too much? For those of us who are not in the actual courtroom we can follow the trial audio stream live while reading comments from live twittering and catching up on live bloggers all over the world. At the end of each day the analyists tear apart all the details and put them back together again.

So we can all gorge ourselves on information until we burst. This actually makes for a very interesting trial. Even if the actual questions were not interesting enough.

Some of the interesting bloggers are (in Swedish) Satmaran, Intensifier, Sundberg and in (English) TorrentFreak, Spectrial…

The Pirate Bay trial is into it’s fourth day and is being reported by bloggers, tweeters, reporters and commentators. It is almost impossible to miss this media event. This is also part of the problem since the trial itself has become larger than life and more interesting than the actual law. In reality the participants are less than exciting and the law plods along in its usual manner.

Things worth noting so far:

The prosecutor strangely decided to alter the charges (dropping copying and focusing on making available) – this is not uncommon but it was strange that it should occur on day two after a year of preparations. At the same time this doesn’t alter much even though it may importantly effect the damages that can be awarded.

The decription of the bittorent technology involved was badly explained. This is even more surprising as the prosecutors description of the facts should have been acceptable to all. Instead everyone is left with the impression that the prosecutor and his surrounding team is not tech savvy at all.