The difference between a community and a network is that you belong to a community, but a network belongs to you. You feel in control. You can add friends if you wish, you can delete them if you wish. You are in control of the important people to whom you relate. People feel a little better as a result, because loneliness, abandonment, is the great fear in our individualist age. But it’s so easy to add or remove friends on the internet that people fail to learn the real social skills, which you need when you go to the street, when you go to your workplace, where you find lots of people who you need to enter into sensible interaction with.

Once again futuramb has a quote that I just need to steal and post here. Well done Martin!

“The sociologist Zygmunt Bauman neatly summarised the paradox of our era as: “Never have we been so free. Never have we felt so powerless.” We are indeed freer than before, in the sense that we can criticise religion, take advantage of the new laissez-faire attitude to sex and support any political movement we like. We can do all these things because they no longer have any significance – freedom of this kind is prompted by indifference. Yet, on the other hand, our daily lives have become a constant battle against a bureaucracy that would make Kafka weak at the knees. There are regulations about everything, from the salt content of bread to urban poultry-keeping.”

Neoliberalism has brought out the worst in us | Paul Verhaeghe | Comment is free | theguardian.com

When my mother attempted to teach us manners as a children she would strictly enforce the no-elbows-on-the-table rule. But when we would question her elbows on the table she would reply that she was old enough to know it was wrong. This is a bit how I feel about the news that Zygmunt Bauman has plagiarized texts. From websites no less!

His accuser, Peter Walsh, a University of Cambridge PhD student, said the websites are at times mentioned in passing as sources, but Professor Bauman does not make clear, through quotation marks or indented text, that he is directly reproducing material.

The Times Higher Education article is interesting in that it demonstrates the sensitivity and care it takes for a PhD student to accuse someone of Bauman’s status. Another academic in the article both says that students would have been failed for doing this but everyone is prepared to give Bauman a chance to explain himself. “He suggested that Professor Bauman’s apparent indifference was the result of “generational differences”.”

The list of venerable established scholars who have been caught plagiarizing is surprisingly long. Recently Jane Goodall blamed “chaotic note-taking” for her plagiarism. The sad thing is that I have heard this excuse from students caught plagiarizing. Being caught seems relatively inevitable in a digital age and the excuses everyone uses are equally sad.

Bauman and Goodall are old enough to know plagiarism is wrong. But does this excuse his plagiarism or make it worse? The question we could ask ourselves is plagiarism as well as the no-elbows-on-the-table rule an anachronistic remnant and we should just ignore these rules since everyone is doing it (not just the kids)? 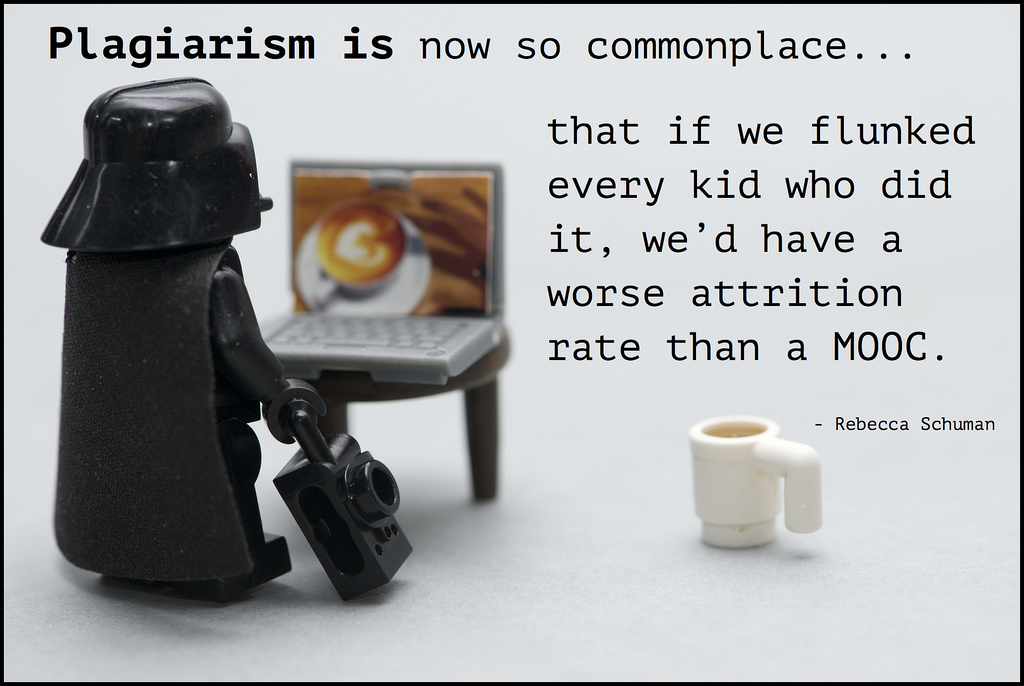 The quote above is from a Slate article The End of the college Essay. The photo is by Kristina Alexanderson and its called Plagiarism. The fun part is that the photo on Vader’s screen is my photo Reaching for my morning fix. Christina uses the photo to discuss what plagiarism is and how a Creative Commons license can help in situations such as this.