“In actual fact, society depends for its existence on the inviolable personal solitude of its members. Society, to merit its name, must be made up not of numbers, or mechanical units, but of persons. To be a person implies responsibility and freedom, and both these imply a certain interior solitude, a sense of personal integrity, a sense of one’s own reality and of one’s ability to give himself to society–or to refuse that gift.”

The quote was part of the podcast episode Never Mind the Stasi, where the host Hari Kunzru explains: “without privacy, without the ability to make basic decisions for yourself, society could not exist. Unless you have freedom to act and can take responsibility for your actions; you are not human in society, just a function, a cog in a totalitarian machine.”

Kunzru is the host of my current favorite podcast – bingeing it now called “Into the Zone” after listening to the episode on cyberspace, I immediately began listening to all the episodes in order.

In a decaying society, art, if it is truthful, must also reflect decay. And unless it wants to break faith with its social function, art must show the world as changeable. And help to change it. 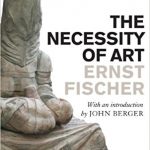 Quantity has its own quality – The quote is often falsely attributed to Stalin. It was used in this great article by Will Self: The awful cult of the talentless hipster has taken over

Aside from the great article it got me thinking about the quote which then led me to find out a examination on Quora written by Nils Barth it’s worth repeating:

Presumably Thomas A. Callaghan Jr., influential US defense consultant of the 1970s and 1980s and director of the Allied Interdependence program at the Center for Strategic and International Studies, arguing for increased spending on weapons.

Earliest result I could find is “Quantity has a Quality All Its Own,” Allied Interdependence Newsletter No. 13, Center for Strategic and International Studies, 21 June 1979 (which Callaghan produced and presumably authored), cited in Naval War College Review, “How much is not enough? The non-nuclear air battle in NATO’s central region”, Volume 33, March-April (1980), footnote on p. 77, quotation on p. 68, echoing similar sentiments by Sam Nunn (“At some point numbers do count.”). This looks like the origin of the phrase.

The phrase has been popular in the US defense community since the 1980s, sometimes acknowledging it as a US coinage, but often misattributing it to Clausewitz, Lenin, Stalin, and Brezhnev, but mostly to Stalin.

The general principle that quantity begets quality is a key tenet of the Marxist theory of dialectical materialism, as formulated by Marx and Engels, phrased as the law of the passage of quantitative changes into qualitative changes. This in turn is attributed to Hegel (Science of Logic), who in turn attributes it to Ancient Greek philosophers, notably the paradox of the heap Eubulides: a quantitative change in the number of grains of sand leads to a qualitative change in being a heap or not. While Marx and Engels are quoted by various Marxist and communist authors, including Stalin, this formulation is not found in their work or in English translation. (Re: “Quantity has a quality all its own” source?, Tim Davenport, H-Russia, April 5, 2010)

Posted on September 5, 2016 by Mathias Klang

To be calm becomes a kind of revolutionary act.

Once again futuramb has a quote that I just need to steal and post here. Well done Martin!

“The sociologist Zygmunt Bauman neatly summarised the paradox of our era as: “Never have we been so free. Never have we felt so powerless.” We are indeed freer than before, in the sense that we can criticise religion, take advantage of the new laissez-faire attitude to sex and support any political movement we like. We can do all these things because they no longer have any significance – freedom of this kind is prompted by indifference. Yet, on the other hand, our daily lives have become a constant battle against a bureaucracy that would make Kafka weak at the knees. There are regulations about everything, from the salt content of bread to urban poultry-keeping.”

Neoliberalism has brought out the worst in us | Paul Verhaeghe | Comment is free | theguardian.com

The first class discussion & lecture of the Civic Media course began with the suitably vague title Technologies of Control and Desire. The purpose of this lecture was to introduce technology into the discussion of ethics and communication. The idea was to talk about the ways in which technologies have been seen both as a source of salvation and as a threat to the society in which they are introduced.

Unsurprisingly, in my eagerness I forgot to talk about the first slide which was a advertisement for an early television remote control. 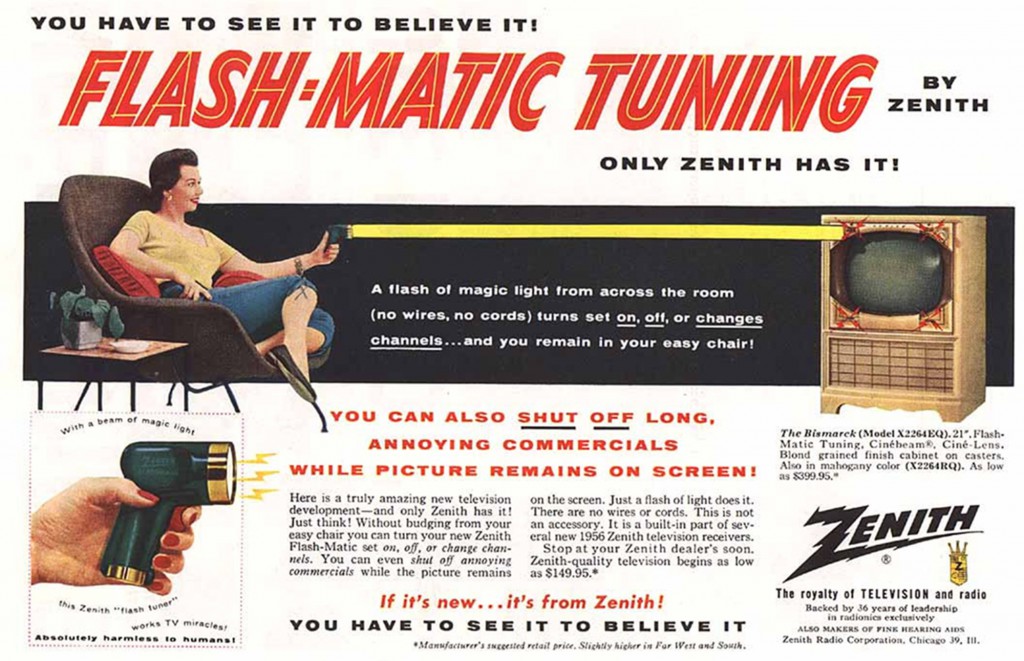 Often the invention of the remote control is credited to Eugene Polley (1915 – 2012) it was an invention that had to happen. People didn’t want to have to stand up to change the channel. What we tend not to think about is that the invention of the remote control allowed for many changes. Thousands of channels would not be able to compete or exist without a remote control. Also advertising was forced to adapt once people could effortlessly change channels or lower the volume. Eugene Polley didn’t create the couch potato but he certainly made life easier for this group.

The first section of the presentation was a very, very brief introduction to technology ethics in order to arrive at the discussion of whether we have free choice or not. Are we choosing to do what we do based on ethical decision making? Or maybe on chance? Or maybe something else? What is the role of technology in forming our worlds and “assisting” our choices.

I included a quote from the composer Stravinsky

In America I had arranged with a gramophone firm to make some of my music. This suggested the idea that I should compose something whose length should be determined by the capacity of the record.

This is a nice illustration where art is no longer necessarily a choice of the creator but rather a decision based on technological limitations. Keeping on the theme of technology I also introduced the idea of technology enabling us to act – or to put it more extremely – technology “forcing” us to act.

To illustrate this I showed them the web page for the iPod Classic which has the line “Your top 40 000”. This refers to the capacity of the device to store 40 000 songs. But how would someone go about collecting so much music? Could it be done legally? Or does this tagline implicitly encourage piracy?

From this point I introduced technological determinism and the idea of choice. Without refuting that we always have choice I gave examples of social and technological mass choices that seem to indicate a high level of determinism.

From this position I pointed out that the way in which technology is accepted depends on the way in which we see it either as a threat or a benefit to our lifestyle. Using weird and wonderful advertisements and technical articles from the past I demonstrated a utopian vision where farmers work from home, students learn without reading and asthma is cured with cigarettes.

In order to demonstrate techno-pessimism I used quotes from Plato (against writing), a snippet against books from Johannes Trithemius’ (1494) In Praise of Scribes

The word written on parchment will last a thousand years. The printed word is on paper. How long will it last? The most you can expect a book of paper to survive is two hundred years.

In closing I reminded the audience of Postman’s comparison between Orwell and Huxley’s visions of the future: Orwell was concerned that we would be oppressed by a technology wielding state. Huxley was concerned that we would all be sucked into the shallow pleasures offered by technology. I pointed out that it has become popular to say Huxley has “won” because social media seems to be people settling for shallow pleasures. However, this is not entirely true and states are increasingly using Orwellian means to control those who would engage in deeper discussions that threaten the state.

I finished off with a short video of Morosov’s work (which can be found online here) and a class discussion. The slides I used for the class are online here

Ever wondered about the difference between the Dandy & the Gentleman? This quote explains it all:

Being consistently well-mannered is far too bourgeois for the dandy: he holds to the more aristocratic character, in that he often feels himself above such workaday concerns as manners and accountability. In order to avoid being thought banal or trite, he becomes impossible to predict: tender and kind one moment, cold and cruel the next. He has transcended any dowdy middle-class notions of what ‘refinement’ is. There are good reasons why the dandy was reviled: he was a self-absorbed, egotistical, useless prick. Nineteenth century books are rife with this dandy vs. gentleman distinction, even having adjoining pictures of each species for clarification.

This quote is from The Dandy as Libertine which I found via Soul Sphincter whose post The Grand Budapest Hotel: Triumph of the Dandy is well worth reading.

Vulpes Libris wrote a review of George Orwell’s gritty Road to Wigan Pier. Which made me go find that half remembered quote.

The world is a raft sailing through space with, potentially, plenty of provisions for everybody; the idea that we must all cooperate and see to it that everyone does his fair share of the work and gets his fair share of the provisions seems so blatantly obvious that one would say that no one could possibly fail to accept it unless he had some corrupt motive for clinging to the present system.

Damn. Awesome. Now I need to re-read the book.