The book market is a mess and the second hand book market is even weirder. As a buyer the second hand books on Amazon are amazing as many hardcover, good condition books are listed at a penny $0.01 of course the shipping is added to this but at $4 a book this is still a sweet deal. After buying the 5 volume History of Private Life and having it shipped to my house for a total of $20 dollars I tried to figure out how it was even possible.

The massive set consisted on Volume I: From Pagan Rome to Byzantium, Volume II: Revelations of the Medieval World, Volume III: Passions of the Renaissance, Volume IV: From the Fires of Revolution to the Great War, Volume V: Riddles of Identity in Modern Times. Its authors are respected historians and the weight alone makes this an impressive purchase.

Naturally it made no sense and I was at a loss to how it worked. Finally, after Googling, I came across this thread. Its from 2012 but it throws some light on how the whole thing works.

In brief:
A seller lists a book for $.01
Amazon collects $3.99 from the buyer and gives $2.66 ($.01 + $2.64 shipping allowance) to the seller. (The $1.35 ‘closing fee’ is subtracted from the shipping allowance by Amazon)
The seller is a ProMerchant, so doesn’t pay the $.99 fee (but does pay $40 per month to be a ProMerchant).
The 15% fee on 1 cent is zero.
The seller pays $2.38 or $2.88 in postage for a 1 or 2 pound package (or less, if it is very light weight and can go First Class. Much less if the penny seller is high volume and uses Bulk Mail).
The seller cost for the book is zero, because he got it for free somehow.
The seller used recycled packing materials, so those cost nothing, too.
The seller ends-up with $.27 (if it’s 1 pound media mail) in a domestic shipment (a bit more if it’s mailed using Bulk Mail).
The seller is happy with his “profit”.
Amazon ends up with $1.35 from the shipping.
Amazon is even happier than the seller.

Its not exactly big bucks but it does explain a little more how 1penny books can be sold at a (sort of) profit.

It’s wrong, but I can’t help it, I found this line really funny:

“Used books are the sluts of the literary world, passed around from person to person spreading their pages for anyone. Getting cheaper and cheaper until they eventually end up in prison”

The quote comes from Stephen Colbert having a justifiable rant against Amazon over their behavior in the Hachette book negotiations.

Actually I love used books. Aside from the amazing concept of being able to get quality work at almost no cost they also present us with several emotions.

The 80 year old book of inferior poetry I picked up in a sale always fills me with sadness because of the hopes and aspirations of the author. The several books with the same ad libris always makes me wonder if I only could have met the owner of this library and spent an evening talking about our shared interests. The lovely little novel I bought in a small town in Sweden makes me think I rescued it like a stray cat.

Most of all I like the small cryptic notes other people write in books. Everything from exclamation marks, angry question marks to words and sentences agreeing or arguing with the author and now being passed along to me.

Here is the entire clip

Another example of slutiness in literature is this 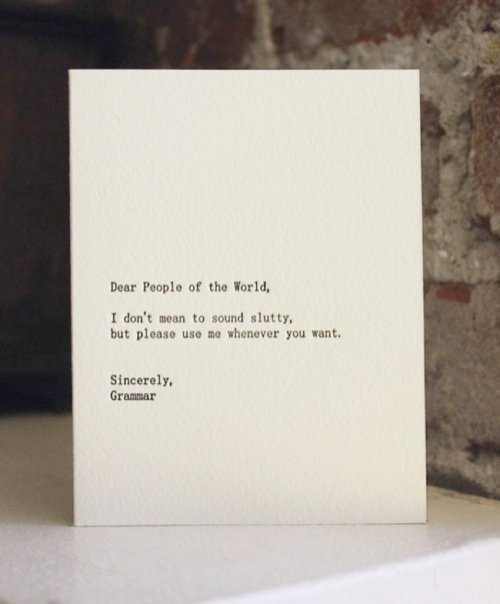 At the moment, those people are obsessed with how they read books—whether it’s on a Kindle or an iPad or on printed pages. This conversation, though important, takes place in the shallows and misses the deeper currents that, in the digital age, are pushing American culture under the control of ever fewer and more powerful corporations. Bezos is right: gatekeepers are inherently élitist, and some of them have been weakened, in no small part, because of their complacency and short-term thinking. But gatekeepers are also barriers against the complete commercialization of ideas, allowing new talent the time to develop and learn to tell difficult truths. When the last gatekeeper but one is gone, will Amazon care whether a book is any good?

George Packer Cheap Words: Amazon is good for customers. But is it good for books? The New Yorker

In the era of the Kindle, a book costs the same price as a sandwich. Dennis Johnson, an independent publisher, says that “Amazon has successfully fostered the idea that a book is a thing of minimal value—it’s a widget.”

That was the quote that headed the article in the New Yorker Cheap Words: Amazon is good for customers. But is it good for books? This is a fantastic question. Books are cheaper than coffee and magazines are even cheaper still. (I just subscribed to Wired for a dollar an issue – with postage). In Sweden cheap books at the train station cost less than magazines but there seems to be a general trend. Without markets being regulated (like for example Norway) the price of books is sinking fast.

Is this a bad thing?

The New Yorker does a good job of comparing Amazon to Walmart and showing how their lack of social support and care for their employees hurts the employees, community and, in the long run, society. The low paying employers are relying on the government to ensure that their profits will be maintained by keeping their workers alive.

Wal-Mart’s poverty wages force employees to rely on $2.66 billion in government help every year, or about $420,000 per store. In state after state, Wal-Mart employees are the top recipients of Medicaid. As many as 80 percent of workers in Wal-Mart stores use food stamps. It’s not only Amazon. Other have to follow or die. Second hand bookshops, these piles of culture and delight are now struggling. Books cost less than their postage.

But what does this cheapness mean for books? With all the discussions about access to knowledge, the decline of reading and the rise of digital devices surely the cheap book is a necessity. But something happens when prices for consumer goods go down. Luxury is what we cannot afford, discounted is what we desire, affordable is the necessity, cheap is suspicious and less than that is without value.

Everyone wants a bargain, by lowering the costs of books we are getting a bargain. But then the price falls even further and we no longer appreciate the book. When I switched from physical CDs to digital music my collection was still valuable and attractive. When I couldn’t bring all my books with me across the Atlantic… nobody wanted them. The music stored in plastic cannot be played without a device, the books could be read by anyone.

Cheap books have made books worthless.