John Cleese on offense and political correctness. He quotes his co-author Robert Skinner “If people cannot control their own emotions then have to start trying to control other people’s behavior”

Which naturally led me to this: 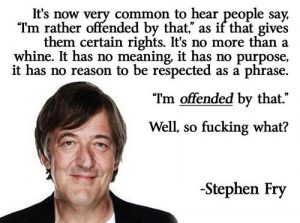 The class today was entitled Public/Private Spaces: Pulling things together, and had the idea of summing up the physical city part of the Civic Media course.

But before we could even go forward I needed to add an update to the earlier lectures on racial segregation. The article The Average White American’s Social Network is 1% Black is fascinating and not a little sad because of its implications.

In the meantime, whites may be genuinely naive about what it’s like to be black in America because many of them don’t know any black people.  According to the survey, the average white American’s social network is only 1% black. Three-quarters of white Americans haven’t had a meaningful conversation with a single non-white person in the last six months.

The actual beginning of class was a response to the students assignment to present three arguments for and three arguments against the Internet as a Human Right. In order to locate the discussion in the context of human rights I spoke of Athenian democracy and the death of Socrates, and the progression from natural rights to convention based rights. The purpose was both to show some progression in rights development – but also to show that rights are not linear and indeed contain exceptions from those the words imply. The American Declaration of Independence (1776) talks of all men

We hold these truths to be self-evident; that all men are created equal, that they are endowed by their creator with certain unalienable rights, that among these are life, liberty and the pursuit of happiness.

but we know that this was not true. Athenian democracy included “all” people with the exception of slaves, foreigners and women. So we must see rights for what they are without mythologizing their power.

In addition they cannot seen in isolation. For example the Declaration of the Rights of Man and of the Citizen (1789) came as a result of the French Revolution include many ideas that appear in similar rights documents

The similarities are unsurprising as they emerge from international discussions on the value of individuals and a new level of thought appearing about where political power should lie.

The discussion then moved to the concept of free speech and the modern day attempts to limit speech by using the concept of civility, and interesting example of this is explained in the article Free speech, ‘civility,’ and how universities are getting them mixed up

When someone in power praises the principle of free speech, it’s wise to be on the lookout for weasel words. The phrase “I favor constructive criticism,” is weaseling. So is, “You can express your views as long as they’re respectful.” In those examples, “constructive” and “respectful” are modifiers concealing that the speaker really doesn’t favor free speech at all.

Free speech is there to protect speech we do not like to hear. We do not need protection from the nice things in life. Offending people may be a bi-product of free speech, but a bi-product that we must accept if we are to support free speech. Stephen Fry states it wonderfully: 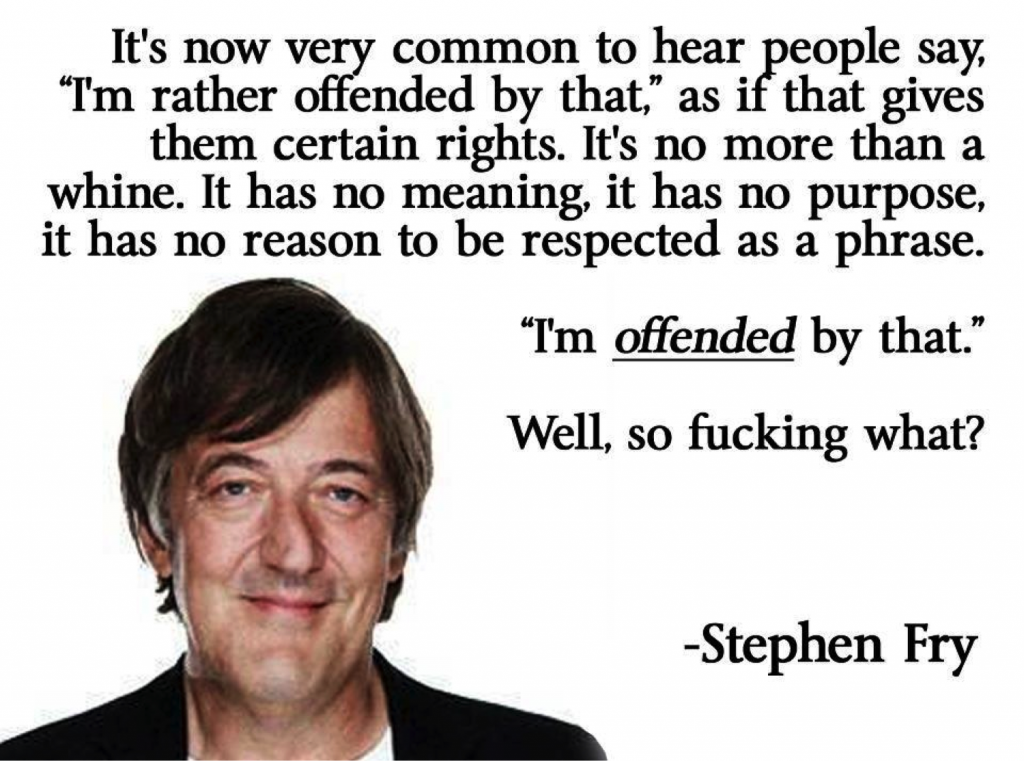 At this point we returned to the discussion of private/public spaces in the city and how these may be used. We have up until this point covered many of the major points and now it was time to move on to the more vague uses. Using Democracy and Public Space: The Physical Sites of Democratic Performance by John Parkinson we can define public as

1.Freely accessible places where ‘everything that happens can be observed by anyone’, where strangers are encountered whether one wants to or not, because everyone has free right of entry

2.Places where the spotlight of ‘publicity’ shines, and so might not just be public squares and market places, but political debating chambers where the right of physical access is limited but informational access is not.

3.‘common goods’ like clean air and water, public transport, and so on; as well as more particular concerns like crime or the raising of children that vary in their content over time and space, depending on the current state of a particular society’s value judgments.

4.Things which are owned by the state or the people in and paid for out of collective resources like taxes: government buildings, national parks in most countries, military bases and equipment, and so on.

and we can define private as:

1.Places that are not freely accessible, and have controllers who limit access to or use of that space.

2.Things that primarily concern individuals and not collectives

3.Things and places that are individually owned, including things that are cognitively ‘our own’, like our thoughts, goals, emotions, spirituality, preferences, and so on

In the discussion of Spaces we needed to get into the concept of The Tragedy of the Commons (Hardin 1968) which states that individuals all act out of self-interest and any space that isn’t regulated through private property is lost forever. This ideology has grown to mythological proportions and it was very nice to be able to use Nobel prize winning economist Elinor Ostrom to critique it:

The lack of human element in the economists assumptions are glaring but still the myth persists that common goods are not possible to sustain and that government regulation will fail. All that remains is private property. In order to have a more interesting discussion on common goods I introduced David Bollier

A commons arises whenever a given community decides that it wishes to manage a resource in a collective manner, with a special regard for equitable access, use and sustainability. It is a social form that has long lived in the shadows of our market culture, but which is now on the rise

We will be getting back to his work later in the course.

In closing I wanted to continue the problematizing the public/private discussion – in particular the concepts of private spaces in public and public spaces in private. In order to illustrate this we looked at these photos: 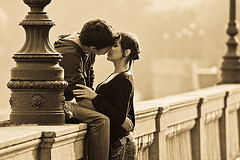 Just a Kiss by Shutterpal CC BY NC SA 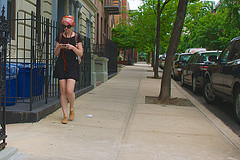 A sign of the times: red hair, red headphones by Ed Yourdon cc by nc sa

The outdoor kiss is an intensely private moment and it has at different times and places been regulated in different manners. The use of headphones and dark glasses is also a way in which private space can be enhanced in public. These spaces are all around us and form a kind of privacy in public.

The study of these spaces is known as Proxemics: the study of nonverbal communication which Wikipedia defines as:

Prominent other subcategories include haptics (touch), kinesics (body movement), vocalics (paralanguage), and chronemics (structure of time). Proxemics can be defined as “the interrelated observations and theories of man’s use of space as a specialized elaboration of culture”. Edward T. Hall, the cultural anthropologist who coined the term in 1963, emphasized the impact of proxemic behavior (the use of space) on interpersonal communication. Hall believed that the value in studying proxemics comes from its applicability in evaluating not only the way people interact with others in daily life, but also “the organization of space in [their] houses and buildings, and ultimately the layout of [their] towns.

The discussions we have been having thus far have been about cities and the access and use of cities. How control has come about and who has the ability and power to input and change things in the city. Basically the “correct” and “incorrect” use of the technology. Since we are moving on to the public/private abilities inside our technology I wanted to show that we are more and more creating private bubbles in public via technology (our headphones and screens for example) and also bringing the public domain into our own spaces via, for example, Facebook and social networking.

here are the slides I used: