Technological systems leave their mark on the way in which we live our lives. An obvious example is this fascinating nighttime photo of North and South Korea taken from the International Space Station. It’s obvious because the two countries are separated by access to the basic supply of electricity.

North Korea is almost completely dark compared to neighboring South Korea and China. The darkened land appears as if it were a patch of water joining the Yellow Sea to the Sea of Japan. Its capital city, Pyongyang, appears like a small island, despite a population of 3.26 million (as of 2008). The light emission from Pyongyang is equivalent to the smaller towns in South Korea. Astronaut photograph ISS038-E-38300 was acquired on January 30, 2014, with a Nikon D3S digital camera using a 24 millimeter lens, and is provided by the ISS Crew Earth Observations Facility and the Earth Science and Remote Sensing Unit, Johnson Space Center.

An even more brilliant (bad pun) illustration is the images of Berlin by night taken from the International Space Station. The photo, taken by Colonel Chris Hadfield, shows that the city still carries with it the heritage of the division. The Berlin Wall came down in 1989 and since then Berlin has been rapidly unifying and developing. Despite this, the East-West divide can be seen in the color of the street lights. 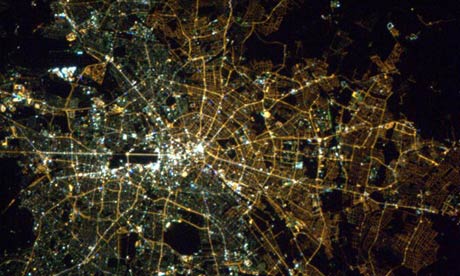 Colonel Chris Hadfield’s photograph of Berlin at night shows a divide between the whiter lights of former west Berlin and the yellower lights of the east. Photograph: Nasa

The technological systems follow the political and administrative lines of the past and cannot be removed as easily as the wall which divided them. The Guardian explains the different colors:

Daniela Augenstine, of the city’s street furniture department, says: “In the eastern part there are sodium-vapour lamps with a yellower colour. And in the western parts there are fluorescent lamps – mercury arc lamps and gas lamps – which all produce a whiter colour.” The western Federal Republic of Germany long favoured non-sodium lamps on the grounds of cost, maintenance and carbon emissions, she says.

These examples are of traces of systems that have failed (or are going to fail). They work on the principle that by controlling users with force they can maintain power. In the end, systems like these, will collapse because the effort of keeping control outstrips the ability to control. Real control is efficient when (1) the users internalize the surveillance/supervision (Foucault: Panopticon) AND (2) users believe that they are acting in their own convenience and desire.

What fascinates me with these examples is the way in which our technology use marks our surroundings. An obvious example of this is the desire path that line which appears in the snow or bare track in the grass that shows how the world is really used by people as opposed to the idea which the designer believed the technology would be used. The difference between expected use and actual use. Technology use leaves its traces in our consumption and adaption to the technology upon which we rely. However, it works both ways. By controlling the technology we rely on, we the users, can be led to believe that we desire the features of control that are provided.

An example of this is the way in which the popularity of the iPhone is no way diminished by, from a usability point of view, android operating systems are infinitely more adaptable to different needs. Or the ways in which the collection of data from technology users is all but ignored by the users in their desire for convenience.

If the iTunes/iPhone is to be compared to a silo keeping its users locked in, then it can only succeeded if (1) the users can be convinced that they are happy with the surveillance/control (Foucault: Panopticon) AND (2) any other alternative would be less convenient. If (1) fails then users would happily jailbreak their devices (on a much larger scale than now) and if (2) fails then the system will eventually collapse under its own weight when users realize that life is better on the other side of the wall.

We will all be controlled by the path of least resistance.