While listening to The Digital Human episode Whispers the presenter Alex Krotoski (aleksk) pointed to a very central way of understanding social media:

In many ways the online world is like a video game. Everything you put out comes with its own scoring system. Tweets are counted by re-tweets and favorites, stories are scored by page views and Facebook likes. Writers reach and influence is visible in its number of followers and the number of influencers who subscribe to his or her feed.

it becomes a competition to see who can get this positive feedback from the community. and people do this by trawling the web for evidence and being the first to publish. To be silent is to lose points, to be re-tweeted is to regain them. The system encourages you to keep feeding the machine…

Naturally, this is a way to understand the online world. In particular it has become a trope of social media that we are talking in order to be constantly re-affirmed by others who are constantly talking. Noise begets noise.

The problem with this view of social media is that it is the view from the top. In reality it does not take into consideration the ways in which most users actually use social media. 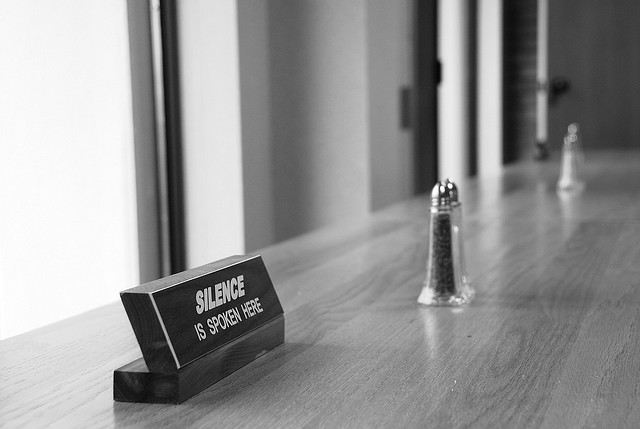 Silence is Spoken Here by Kris CC BY NC SA

Most users on twitter do not have thousands of followers, many do not even tweet. Like most of us, at most parties, they tend to listen to others more than speaking themselves. But in the collective babble of noise it is taken for granted that all we want to do is to make ourselves heard and to make others admire the noise we make.

The same is true on Facebook. There are users with friends numbering in the thousands, who cannot pass by a meal without documenting it. But most are silent users who like often and post occasionally.

The social part of social media does not have to mean that those who are silent are losing. We are social even when we are silent.

For more on this topic I recommend Susan Cain’s book on introverts. An elegant puff for the book is her TED talk: Susan Cain: The power of introverts

In a culture where being social and outgoing are prized above all else, it can be difficult, even shameful, to be an introvert. But, as Susan Cain argues in this passionate talk, introverts bring extraordinary talents and abilities to the world, and should be encouraged and celebrated.